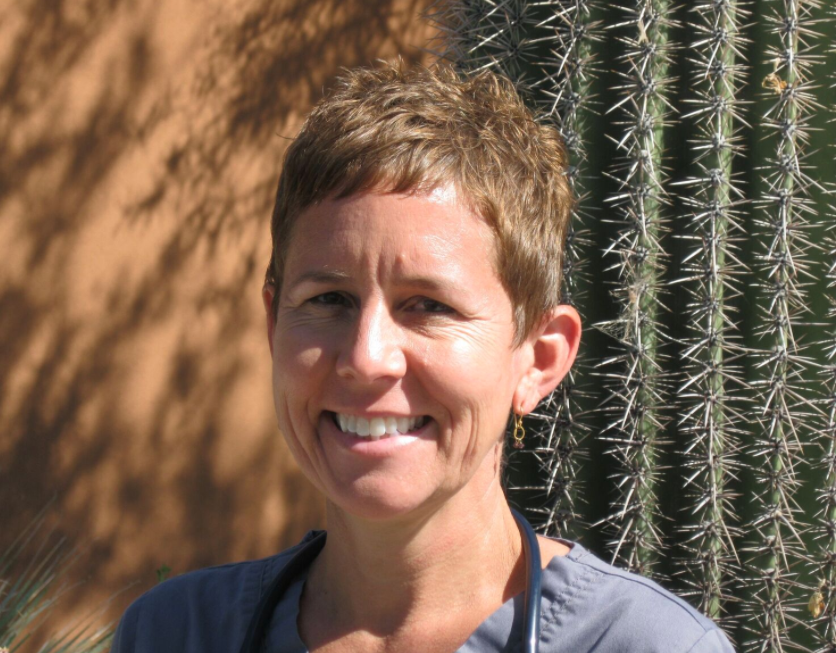 Dr. Ariano joined Chaparral Veterinary Medical Center in 2014 after practicing in North Scottsdale and Tempe for 15 years. She grew up in Chicago, Illinois, attended Cornell University for undergrad and Ross University for veterinary school. After practicing in New York, she and her husband relocated to North Scottsdale in 1999 where they currently reside with their two sons, Enzo and Nico. Dr. Ariano uses her 20 years of experience to head up our small animal practice, specializing in internal medicine, surgery, geriatric care and canine and feline dentistry. Dr. Ariano chooses to donate her time and services with a number of rescue groups in the area. Her family currently has two rescued dogs - Campari (a red Heeler) and Corey (a Heeler mix), a cat, Mr. Shiney, from a litter the hospital nursed since birth, hamsters and a family of snakes. Dr. A (as we like to refer to her) enjoys spending her free time running marathons, traveling and spending time with her family. 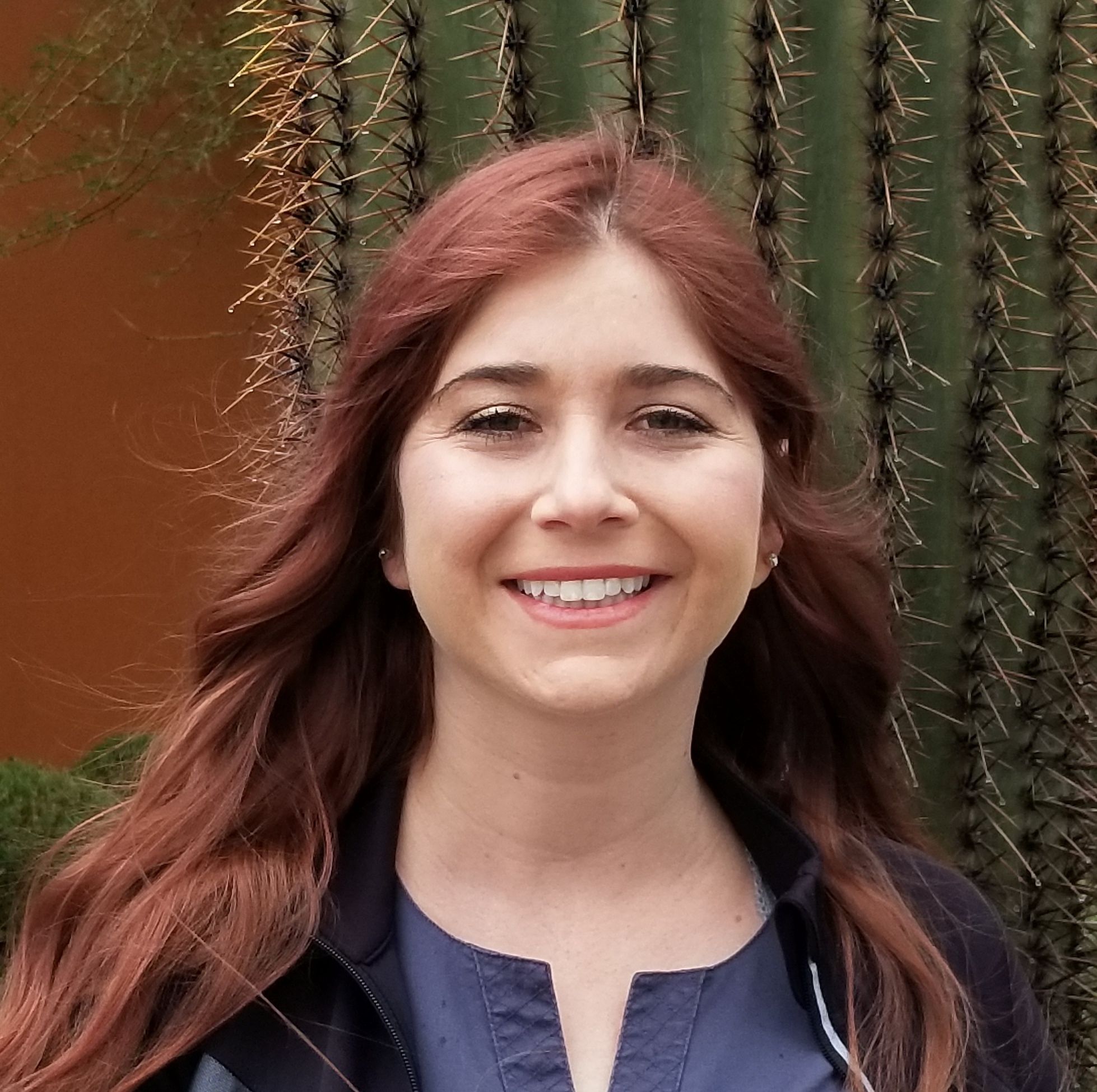 Dr. Courtney Ells has lived in Phoenix for over 15 years and received a Bachelors of Science from Arizona State University in 2013. Dr. Ells joined Chaparral Veterinary Medical Center in 2018 after Graduating from Midwestern University College of Veterinary Medicine with honors and a Doctorate of Veterinary Medicine. She currently has a horde of animals; two rescued dogs [Blueberry (a deaf Australian shepherd) and Athena, (a golden retriever mix)], a horse named Libbie, a bunny named Oatmeal, and a ferret named Bailey. Professionally, Dr. Ells interests include small animal practice, focusing on internal medicine, general surgery, geriatric care and canine and feline dentistry. Outside of work, she enjoys spending her free time riding horses, hiking and traveling. 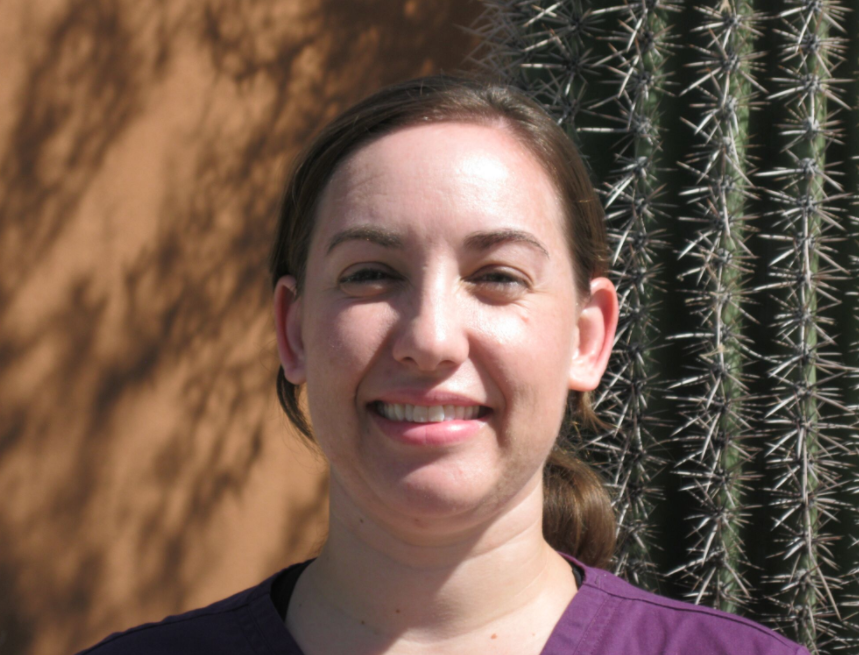 Tiffany is a native of Arizona. She loves spending time with her husband, 2 boys, and dogs. She started at Chaparral in 2007 and left at the end of 2008 to become a full-time mom. She has come back once again to join the small animal team and do one of the things she loves, take care of animals! 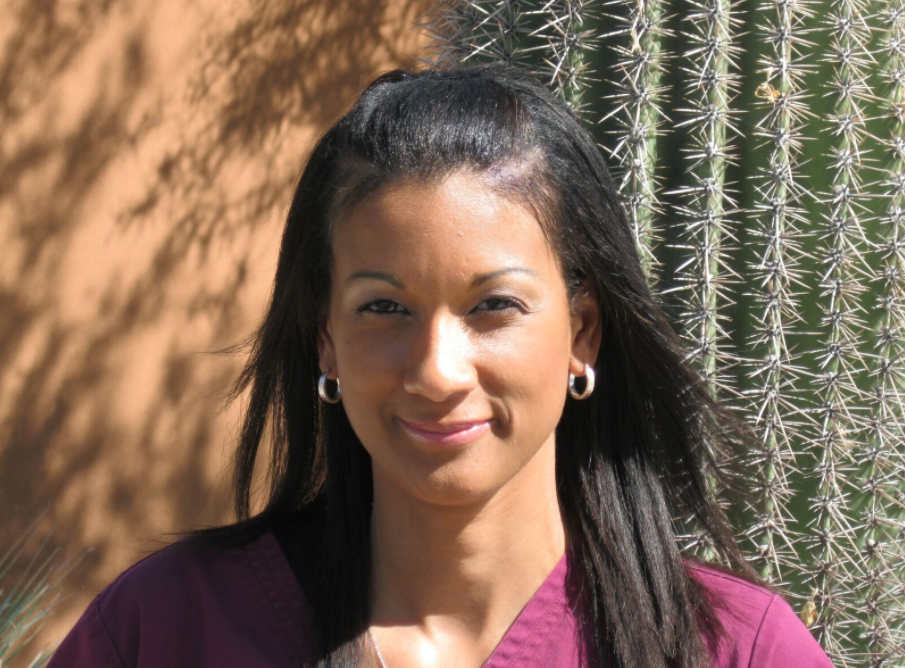 Tianah is from Chicago, IL and joined Chaparral in 2015. She's has worked as a small animal technician for 13 years. Tianah has two dogs and a cat. She is a mother of four beautiful children and married to her husband Michael. 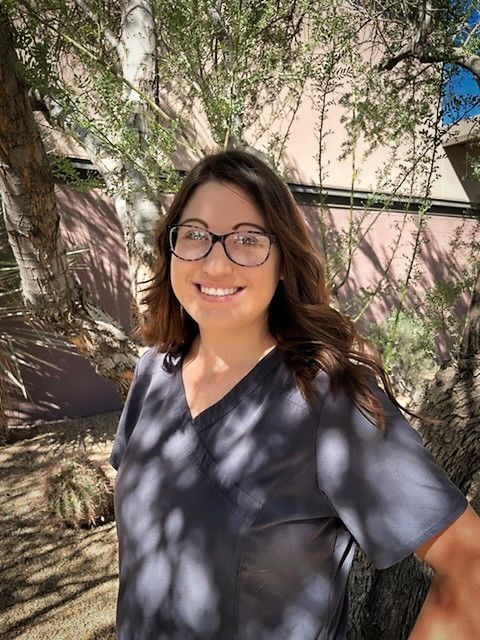 Anna was born and raised in Arizona. Her passion for animals started off at a young age. From having her own pets to even volunteering at a horse and canine rescue witnessing the good and bad that came with it. Anna knew she wanted to be an advocate for animals. She graduated from Pima Medical Institute as Certified Veterinary Assistant in 2018 and continued on to Pima Medical Institute's Veterinary Technician program and achieved an Associate Degree in Veterinary Technology in 2020. Anna has a beautiful family with her husband, two sons, and four dogs. In her free time, she loves to read, spend time with her boys, and catching up on some sleep. 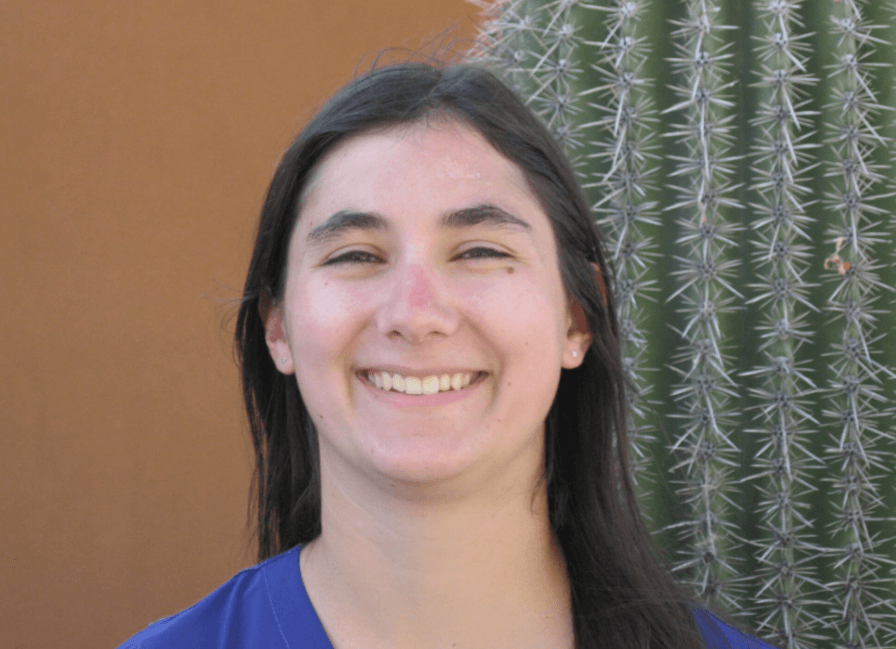 Emily grew up in the small town of Bull Valley, IL. She's been involved in the horse industry since she was 6 years old, starting with riding lessons and eventually spending every free second at the barn. Emily graduated in 2014 from William Woods University with a B.S. in Equine Science and Equestrian Administration. She went back to Illinois after graduation and worked as an assistant barn manager at a local lesson barn, training horses on the side. In November of 2016, she found herself moving out to Arizona and got a job as a large animal technician at Chaparral. She spent some time as an ambulatory tech before moving in the hospital as the medicine technician. Since 2021, she has now worked in our small animal department. In her free time, Emily enjoys spending time with her Paint horse, Cruise,her German Shepherd, Zazu, Golden Retriever, Sylvie, Warmblood, Max and her cat Koda. During the months when it's tolerable to be outside, you can find Emily hiking, trail riding, or just spending time outdoors. 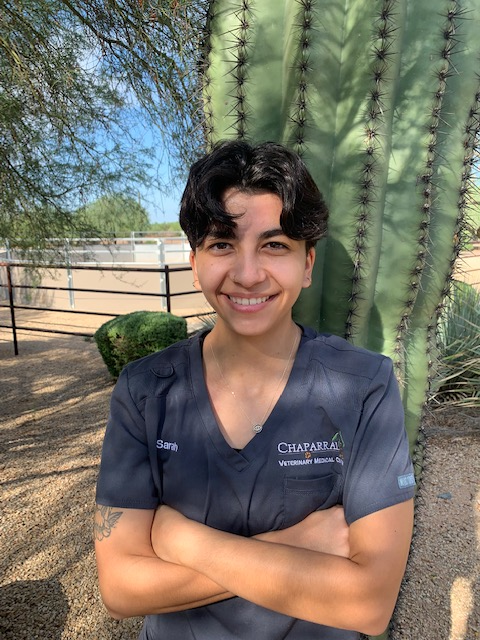 Born and raised in Arizona, Sarah completed a Bachelor's degree in biology at NAU. When she is not providing excellent customer service to Cave Creek's dogs and cats, she can be found hanging out with her Leopard Geckos, Pablo Smudge the cat, and playing guitar, reading, and drawing. 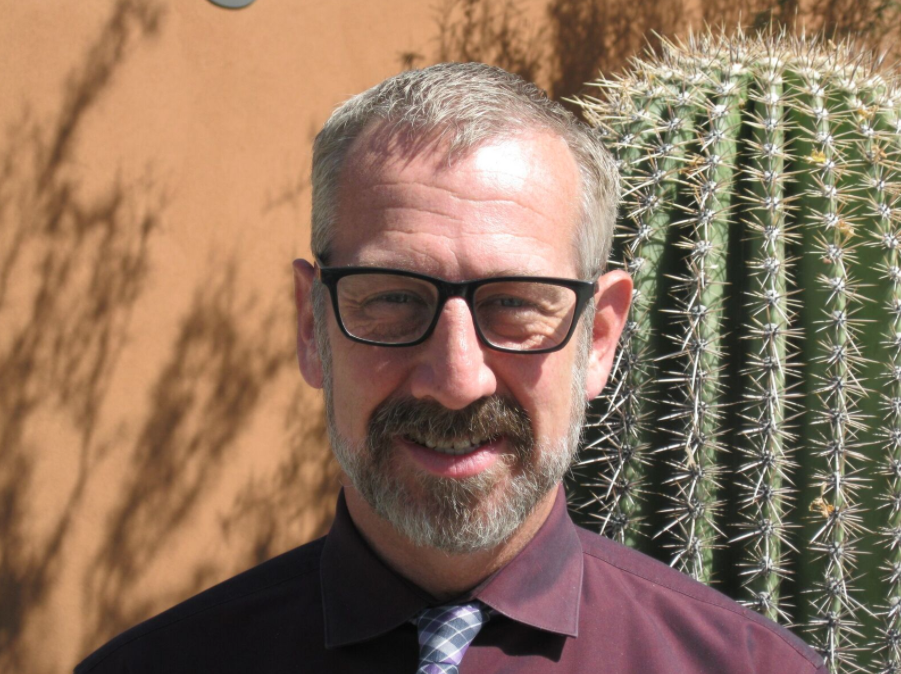 Brandt is originally from Southern California and has spent many years in healthcare management and operations positions. He has a BS in Organizational Management from the University of La Verne, and an MBA in Healthcare Administration from the University of Saint Mary. Brandt enjoys spending time with his dogs Loki and Elvira, and Lemmy the Cockatiel. He and his beautiful wife, Heather, enjoy beach camping and spending time with their two lovely granddaughters. Holly recently joined the Chaparral team and is enjoying our clients and her colleagues. She has a long history of administrative work in the legal, real estate development, construction and shopping center management industries and has always had a love of animals. She started off her oldest daughter at the age of 3 riding horses and her love of horses continued with her other 2 daughters. She now enjoys spending time with her husband, 3 grown daughters, her grandson and their many rescue dogs and horses. She, her husband, middle daughter, and grandson recently moved back to the United States from living in Melbourne Australia. 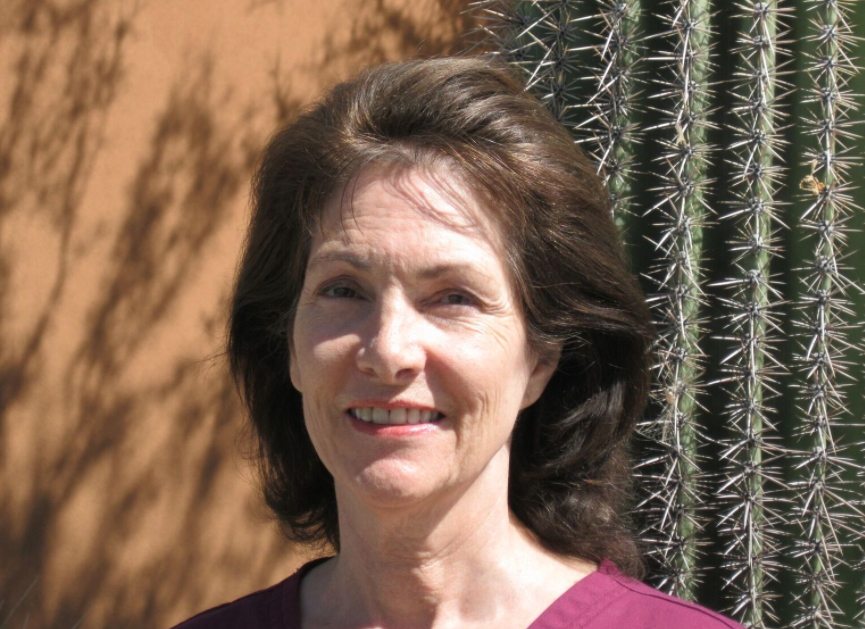 Suzan is originally from central California, but she has lived in the Scottsdale area for decades. She has always had a passion for animals and raised poodles and Lhasa Apsos in the past. She satisfied her equine passion by completing the Equine Science program at Scottsdale Community College resulting in a degree in Equine Science. Suzan spent many years as the office manager at Southwest Equine Hospital in Scottsdale. She was also employed in administrative positions in retail, real estate, health care and she now has returned to the veterinary world. She is the proud owner of 2 rescue dogs: Sally (a jet-black corgi mix,) & Sunny (a buff cockapoo mix.) Her many hobbies include fitness, music, and travel, but she spends most of her time enjoying her home and teenage son, Robert. 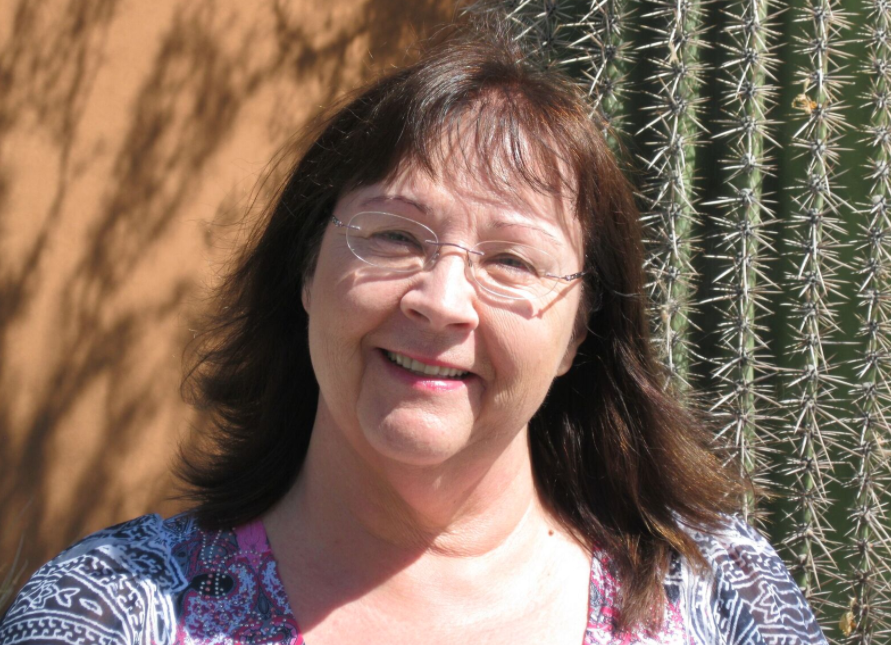 Merle recently came to Chaparral Veterinary Medical Center as our new bookkeeper. She recently moved to Arizona from Southern California after many years working in the non-profit sector. The need to assist our fellow man and four-legged friends never leaves our heart, which makes Chaparral a perfect fit for her. 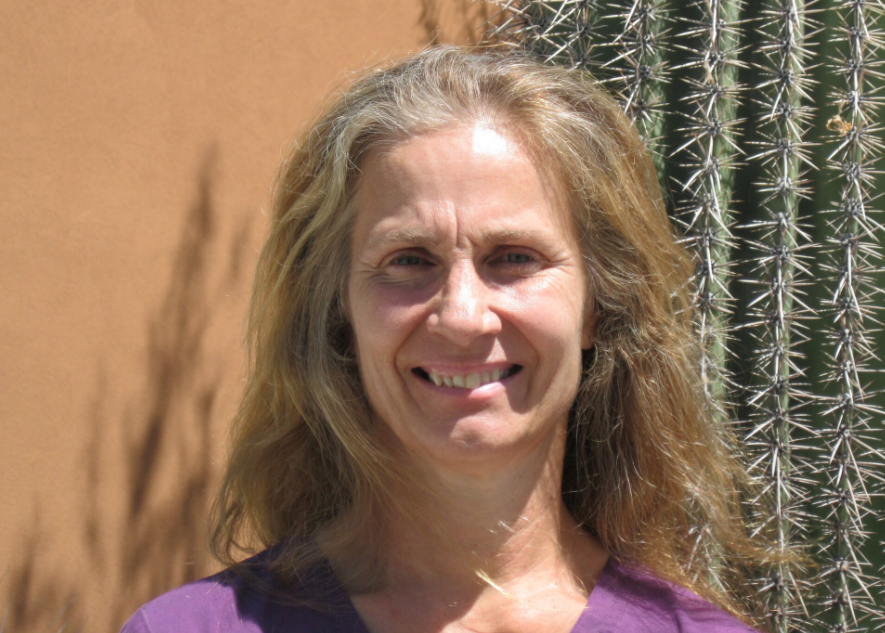 Amy has been working with horses for 29 years in many different venues and has been fortunate to have traveled around the United States and the world. She started out working with and riding racehorses and her dream always been to help care for horses. Amy also loves working with a passionate group of people who love what they do. She enjoys spending time with her wonderful daughter, Mae, and husband, Wilson, who also works at CVMC.