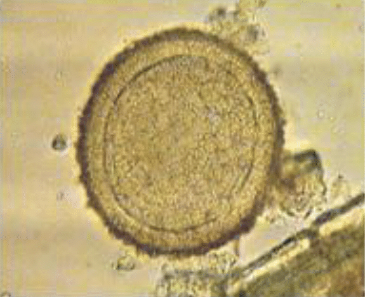 Traditionally the most commonly used anthelminthic protocols were rotational; however they were developed years ago when the most common parasite affecting equids were Strongylus vulgaris (large strongyles). Today cyathostomins (small strongyles) are recognized as the most common adult equine internal parasite with Parascaris equorum (the equine roundworm) being the major endoparasite of foals and weanlings. With the current common parasite problems and anthelminthic resistance patterns, new, more updated parasite control programs are recommended.

It is recommended to focus anthelminthic treatments at the times of year that are most optimal for larval development and transmission. This will reduce pasture contamination and acquisition of new infections. Appropriately timing treatments and avoiding treatment in the coldest and hottest months of the year when transmission is lowest, will also help to lessen the likelihood of anthelminthic resistance.

Once or twice yearly deworming treatments are recommended. At least one of those treatments should target the encysted form of small strongyles in the early fall (Northern climates) or spring (tropical or subtropical climates).

Fecal egg count reduction tests should be considered at least every three years to evaluate the efficacy of dewormers and to detect any anthelmintic resistance. These can be performed by your veterinarian. A fecal sample is submitted for fecal egg count, an appropriate dewormer is recommended based on the findings and another fecal count is taken and evaluated 10-14 days after the dewormer is given to determine if the treatment was effective. If the dewormer was effective, the fecal egg count should be reduced by at least 95%. This is a good way to limit overuse of dewormers and to allow your veterinarian to recognize resistance problems on your farm.

Any further treatments (greater than biannually) should only target horses with a high small strongyle contamination potential (high shedders) based on fecal egg counts to prevent further anthelmintic resistance. Typically only a small fraction of the horses on the farm shed ~80% of the eggs into the environment, so targeting those high shedders is a good strategy for addressing parasite problems on your property.

Cyathostomins (small strongyles)
Due to their ubiquitous nature frequent anthelmintic treatments are not necessary to keep adult horses healthy. Property timed treatments with effective anthelmintic administered at the appropriate time of year are necessary. Unfortunately, widespread resistance to all anthelmintics has been documented in this class of endoparasites.
Treatment: Ivermectin or moxidectin

Anoplocephala perfoliata (Tapeworms)
This parasite’s eggs can be difficult to identify in feces due to intermittent shedding. Therefore, it is recommended that all horses have a single annual tapeworm treatment. Treatments should be in late fall or early winter after tapeworm transmission ends due to cold weather.
Treatment: Praziquantel (in combination with ivermectin or moxidectin) OR pyrantel pamoate (double the nematode dose)

Parascaris equorum (Roundworms)
This is the most important parasite in foals that can cause ill-thrift, poor growth and colic post-treatment. Due to the risk of small intestinal impactions following treatment in high worm burden foals, fecal egg counts are recommended prior to treatment to identify those at highest risk. Resistance to several anthelmintics has been documented. Drugs with a paralytic mode of action such as pyrantel pamoate should NOT be used to treat foals with a high roundworm burden as the rapid die off could lead to life-threatening consequences.
Treatment: Fenbendazole

Oxyuris equi (Pinworms)
These parasites cause intense tail rubbing and hindquarter and/or perineal excoriations. These parasites can be prevented with routine anthelmintic treatment protocols; however some anthelmintic resistance has been documented among this group of parasites. Testing for this parasite is different because the parasite deposits eggs in sticky substance around the perineum and anus of the horse. Therefore the scotch tape test is the best way to identify this parasite.
Treatment: Pyrantel or fenbendazole

Bots
These parasites are rarely associated with measurable disease. They can be treated once annually during late fall or early winter with routine anthelmintic treatment protocols.
Treatment: Ivermectin or moxidectin